As a relatively new SAHM, things can get overwhelming and frustrating since I'm still getting used to being at home full-time and living in a city that is newer for Mr. Picturesque and I. So instead of solely focusing on getting Baby P. down for her naps, sticking to our daily schedule, and meeting new mom friends... I decided to start some crafts that I've always wanted to do for my children. This led me to crocheting!

I've always wanted to crochet. I've been interested in learning for at least ten years, but every time I started I stopped from it seeming too complicated. During Baby P's nap times, I decided it was a good time to start picking this up again. I found an amazing video that literally was SUPER EASY to follow and started to crochet Baby P's first handmade beanie.

Here are the video directions:

I did have to make some alterations to Wooly Wonders Crochet's directions, since I had a different sized crochet needle than she used and Baby P was much bigger than the video directed. Basically I just added many more rows than the video directed and it fits perfectly! It took me a few days to complete this project (mostly because I worked on this at nap times and her play times).

When I was done, I decided it would look even cuter with a flower on it. I had felt lying around so I thought, "hey let's find a video on how to do a felt flower." To complete the felt flower, it literally took me 5 minutes! Super easy and quick! Here's the video with those directions:


A photo of the finished product: 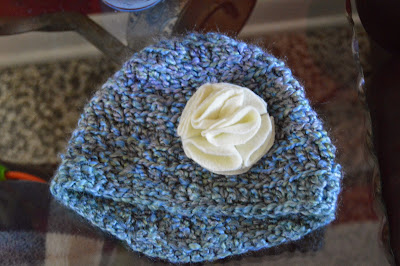