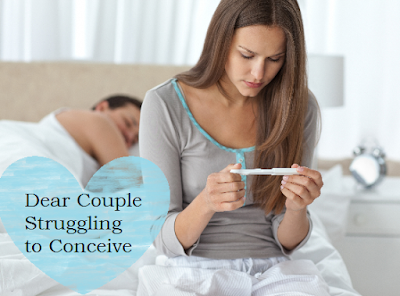 Dear couple struggling to conceive,
If you are just starting to try to get pregnant, than this is probably a super exciting time for you. But for those of you who have been trying to conceive for months now, you might be starting to feel discouraged. I want you to know, I know how hard it might be for you right now.
When my husband and I started "trying" we decided we were going to stop preventing pregnancy and we were just going to let God take control. The thing is after months went by of negative pregnancy tests and my menstrual cycle starting... it was hard not to get depressed and worried. We started to talk about whether or not there was something wrong, or if we could even get pregnant. We tried to be okay about the fact that we might not be able to get pregnant, after all we do plan to adopt in a few years. But we really weren't feeling okay.
We started off officially not "trying," but after a few months went by of negative pregnancy tests... we ended up trying too hard. We were tracking my ovulation schedule, I bought special lubricant that wouldn't kill semen, and I avoided anything that I could ingest that would hurt a baby (alcohol, caffeine, ibuprofen...). Eventually we were working so hard to get pregnant that we no longer enjoyed our intimacy together.
Finally I decided to just hand it over to the Lord. We surrendered it, prayed about it and let go. Later that month, I found out I was pregnant!
There are many things I would tell myself, if I could go back in time to those months we were trying to conceive. I would say to my past self:

I'm hoping that my experience will help you who are trying to conceive and comfort you in some way of knowing that you are not alone!
Posted by Unknown at 2:56 PM