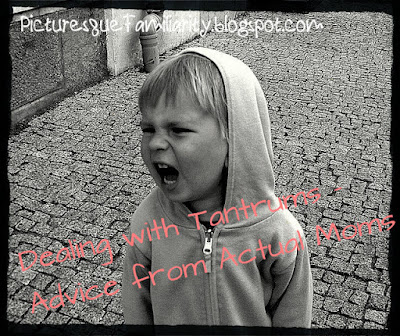 Photo credit edited.
It's "Helpful Tip Tuesday" again, and today I'm going to talk about how to deal with your toddler's tantrums. As you may know, Toddler Picturesque is about a year and a half now. With that age comes toddler like attitudes and emotions. She has started to exert even more independence. She has always worn her emotions on her sleeve, which I love. She is super expressive (just like her parents). But the last few weeks she has started pouting, and tantrums.
I tried pretty much everything that has worked before when she starts being irrational: Correcting, explaining why, hugging, ignoring the tantrum, distracting and so on... Unfortunately these things weren't quite working the last few days. Thankfully (through much prayer), I figured out it was a mix of sleepiness, and teething that was the issue. What helped us get past these tantrums was orajel naturals and nap time early.
But when we were knee deep in tear stained cheeks and screaming fits with Toddler P., I decided to go to the internet and ask other parents what they have found helpful to stop tantrums with their kids. I thought I would share their responses with you:

What's your opinion? How have you dealt with temper tantrums with your child?

Shared at: Wise Woman Builds Her Home, A Little R&R Wednesday, Works for Me Wednesday, and Homemaking Linkups.
Posted by Unknown at 8:57 AM