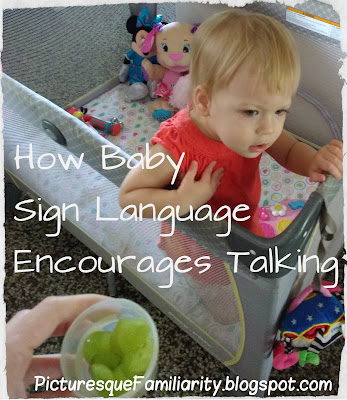 In the above pic, Toddler P. is actually using the sign for please because she was asking for her grapes!

Parents using baby sign language is a recent phenomenon, and since it started there has been a lot of research into the many benefits of teaching it to your baby. We started doing sign language with Toddler Picturesque at a fairly young age, at about 3 or 4 months. Although I didn't steadily use it with her till she had said her first words, as then I knew she was ready to start learning. For us, and I know many others, baby sign language has been a great way to communicate when communication skills are limited. This has helped curve so many outbursts now from a toddler who just doesn't know how to communicate what she needs.
But don't take my word for it, here's the research about the language, attitude and psychological benefits sign language could have for your child:


So how can you attempt to teach baby sign language to your child? It's fairly simple actually and usually just takes repetition. Here are some easy to follow steps:


It's also important to note that the reason why, I believe, that this has been such a success for us and why Toddler P's language skills are doing so well is because Mr. P and I talk to her constantly. We have been talking to her and letting her attempt to talk back since she was a newborn. How else can a child learn language skills unless you communicate with them like a human being?

Here are some basic signs to start with: Pin this article.
Posted by Unknown at 12:43 PM